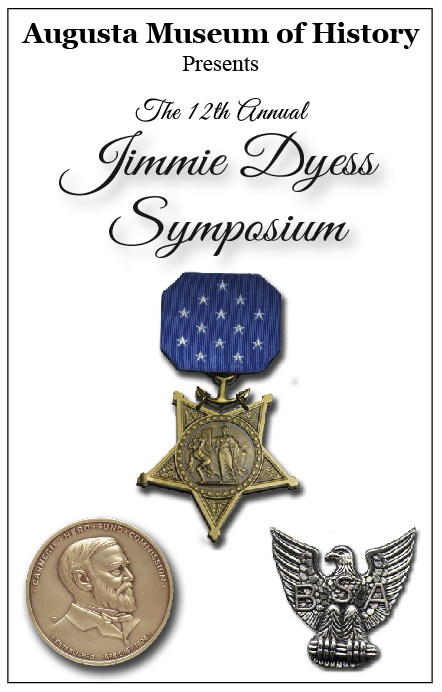 After lengthy discussions, the Augusta Museum of History has concluded that given the uptick in the Omicron variant, it is in the best interest of our 2022 recipients and Symposium that we present the 2022 Jimmie Dyess Symposium virtually and it will not be an in-person event. The Symposium will be recorded and available via our Facebook page and YouTube Channel.

The symposium was created and developed to recognize Marine Lieutenant Colonel Jimmie Dyess's courage as both a citizen and a service member of the United States and to identify others who have shown similar valor or made civic contributions above and beyond the call of duty. This event supports six worthy causes. No other fundraising event in the CSRA has such a wide impact.

The symposium includes talks by several distinguished individuals, including the yearly recipients of the Jimmie Dyess Distinguished American Award. The 2022 Symposium will include remarks by Major General Perry Smith, who served thirty years in the United States Air Force flying missions over North Vietnam and Laos. Honorees for 2022 are Mrs. Christine Miller Betts, Patricia and Charles Moye, and Medal of Honor recipient, Robert (Bob) Kerrey. Each will receive the Dyess Symposium?s Distinguished American Award. Chris for her role in starting the first African American Museum in the region, Pat for her community leadership in the arts, Charlie for his participation as board member and volunteer in numerous organizations, and Bob for his heroism, compassion and community service.

The Symposium program will be available at 5 p.m. on January 13th on the Augusta Museum of History's YouTube Channel and links provided through the Museum's website and Facebook page. For more information on the Symposium, please contact the Museum at (706) 722-8454.

Please consider making a tax-deductible contribution to the Augusta Museum of History to insure this event will continue for years to come.

MISSION OF THE JIMMIE DYESS SYMPOSIUM

I. To preserve and enhance the legacy of Marine Lieutenant Colonel Jimmie Dyess, the only person to have received America's two highest awards for heroism, the Medal of Honor and the Carnegie Medal.

II. To salute outstanding Americans who, over a lifetime, have made major contributions to their nation, their community and their fellow citizens. The 2022 Dyess Symposium will be honoring the following individuals: Charles and Patricia Moye, Christine Miller-Betts, and Medal of Honor recipient Joseph Robert Kerrey.

III. To support the Congressional Medal of Honor Foundation by drawing widespread attention to its mission of perpetuating the Medal of Honor's legacy through outreach and collaborate efforts.

IV. To highlight the Carnegie Hero Fund Commission and to give visibility to those who have received America's highest award for civilian heroism, the Carnegie Medal.

V. To welcome people from all over America who visit Augusta to attend this symposium and to meet and visit with the honorees.

VI. To lend public and financial support for the Augusta Museum of History. In this award-winning museum is a permanent exhibit which honors Jimmie Dyess. The large crystal exhibit of the Dyess Symposium is on permanent display at the museum. It features the three awards that Dyess received: the Medal of Honor, the Carnegie Medal and the Eagle Scout Award.