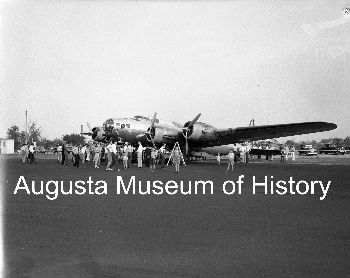 Crowds gathered to see a B-17 on display in Augusta. Developed before the bombing of Pearl Harbor, the Boeing B-17 long-range bomber would prove to be an invaluable asset and workhorse throughout World War II and served in almost every theater of the war. A crew of ten men manned the controls and guns that were mounted all over the plane. The B-17 was used most famously by the Mighty 8th Air Force based in Britain, beginning in 1942. The bomber group carried out long-range bombing missions against Nazi forces in occupied France. In January of 1943, the plane made its first bombing runs over Germany. Many times the famously tough B-17s would return from missions having sustained damage that would have brought down most aircraft. Not immune to losses, however, it was statistically impossible for crews to complete their 25 mission tour. Over 40,000 US airmen died in combat during the war. Out of the nearly 13,000 B-17s made, only a handful survive today.