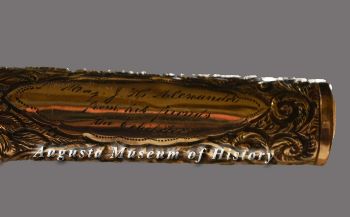 Walking cane with a blackened hard wood shaft, metal tip, and gold elongated cylindrical handle. The golden handle is decorated with Victorian floral flourishes. The first inscription reads "Maj. J.H. Alexander / from his friends / the Exhibitors" and the second inscription reads "Augusta, Ga. / 1888". The metal tip at the bottom is 1.25" and appears to be tin or steel. There is a maker's mark on the bottom the handle that reads "RES&CO".

James Hammond Alexander worked on the committee for the development of Augusta's first National Exposition in 1888. There would be two more expositions - 1891 and 1893. The expositions were held near the modern day intersection of Central Avenue and Druid Park Avenue. They would often last for a month and would showcase the latest in industrial technology.

Alexander would later be elected as Mayor of Augusta from 1891 to 1894.