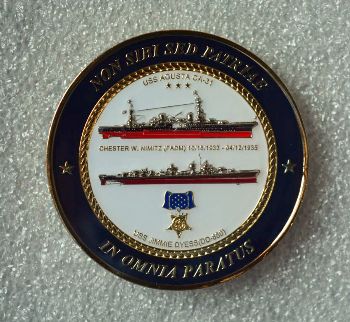 Circular commemorative coin known as a Navy Operational Support Center medallion. It is also called a "challenge coin." This medallion was created to feature the USS Augusta ship. One side of the medallion has a white central circle with a ship, a sub and a medal depicted. The top ship is the USS Augusta CA-31, but the name Augusta is misspelled as "Agusta". Below the Augusta is the submarine "Chester W. Minitz (FADM) 10/16/1933-04/12-1935" and below this is a Medal of Honor with the wording "USS Jimmie Dyess (DD-880)". Surrounding the white central depiction is a blue band with the following Latin words in gold lettering "Non Sibi Sed Patriae / In Omnia Paratus".

On the reverse of the coin is a large white central circle with the trident of Poseidon/Neptune surrounded by a crown of laurel in gold metal. Surrounding the central white circle is a band of navy blue enamel with the following words in gold lettering "Navy Operational Support Center Agusta [sic] / Commanding Officer". This is the first challenge coin to represent the USS Augusta.