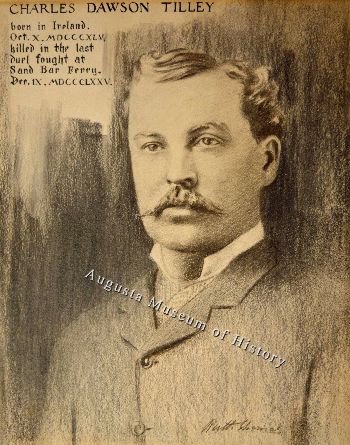 Rectangular charcoal painting of Charles Dawson Tilley, an Irish immigrant who defended the honor of Mary Clark de l'Aigle. This portrait shows Tilley from the waist up. He is wearing a high-buttoning coat with a stiff collar and neck cloth. He has receding dark hair and a wide, skinny mustache. The handwriting on the top left corner reads "born in Ireland. / Oct. X.MDCCCXLV. / killed in the last / duel fought at / Sand Bar Ferry. / Dec. IX. MDCCCLXXV." The bottom right corner has the artist's signature as "Ruth Thomas".

After the death of her husband Louis de l'Aigle in 1868, Mary Clark de l'Aigle opened a boarding house in her home at 551 Greene Street. One of her boarders was a recent immigrant from Ireland named Charles Tilly.

In 1875, Mary Clark de l'Aigle, age 35, was a young widow and Charles Tilly was 30. Rumors were that their relationship was of a more romantic nature than just landlord and tenant. Tilly discovered that a man named George E. Ratcliffe was repeating these rumors. He confronted Ratcliffe demanding he tell him his source. Ratcliffe refused and Tilly challenged him to a duel.

Dueling was banned in Georgia, so the men met on the South Carolina side of the river near Sand Bar Ferry. They both were armed with Colt's Navy 6-shooter pistols and upon hearing the word "fire" they shot their guns. Ratcliffe remained unharmed but Tilly was mortally wounded on his right side just above the hip. Tilly was taken to Mary's house where he would die the next day. The age of dueling soon came to an end and Tilly is remembered as the last Georgian man to die from dueling.

In honor of his defense of Mary's reputation, the de l'Aigle family buried Tilly underneath a large Celtic cross in their grave plot in Magnolia Cemetery.

Donated by the Augusta-Richmond County Government at the request of the DeLaigle family.