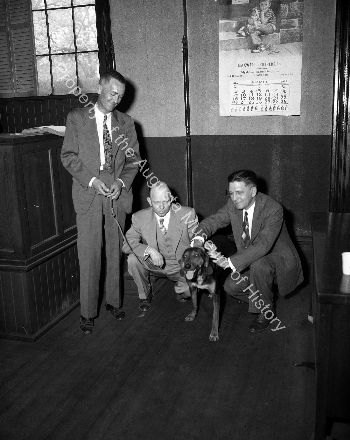 A Hound Dog Goes to Court

A Hound dog was taken to Municipal court over a dispute of ownership on April 18, 1950. We don't know who won the case, but if Andrew K. Rhodes won the dog's name became "Joe Wilson." If Homer H. Stewart of Oakland Drive won, the dog was named "Douglas MacArthur." In the photo, Judge L.W. Cooper holds the leash of Douglas/Joe while the two attorneys look at the dog; John F. Hardin (left) was Rhodes' attorney and Wilmer D. Lanier (right) was Stewart's.

Donated by Charles and Linda Askey. To see more photos in the Robert Wilkinson Collection, search "Wilkinson" in the collections search bar.